To book your free trial class select the class, day and time you would like to attend. Fill out the form below and we will reply with confirmation of your booking within 24hrs.

Many children act out and display aggressive behaviours because they lack the ability to accurately express what they are feeling. Without the emotional maturity and discipline to handle and express their frustrations, they often act out physically.  Unfortunately, this is viewed as aggression.

A primary reason that martial arts helps those who do not have control of their emotion is that it not only teaches kids how to be in control their bodies, but also how to control their frustrations. Using mental conditioning, martial arts gives them the tools to better manage their feelings and with newfound in themselves, they make better choices on how to express those feelings.

Some would say Martial Arts is an aggressive sport, however, research has shown it can make children less aggressive. Aggressive Children usually lack self-control. The core of martial arts dates back thousands of years and preaches the importance of self-control.

The physical aspect of martial arts, which some mistake as aggressive, is designed to instil discipline.  It is not about kicking and punching, it’s about developing and mastering strong and effective techniques to master specific manoeuvres.  This requires focus, dedication and the ability to embrace one’s emotions, especially when things do not go as planned. 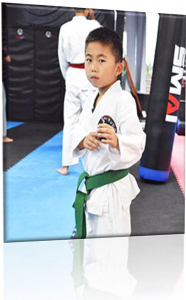 Martial arts also focuses’ on managing impulsive actions as well as hostility and aggression, while building a person’s character that is honourable, non‐violent and respectful.

Overly aggressive children do not think before they act. By improving concentration and self-awareness as well as emotional stability and self-regulation, martial arts empower these children to stop and think about the action they want to take before they actually take it.

Our instructors aim to understand the root cause of each person’s aggressive behaviours and use compassion and patience to teach these children how to best express themselves.  In addition, they hold the students appropriately accountable for their behaviours along the way. The result is a marked decrease in aggressive behaviour.

Studies have shown that exercising several times a week can help children control their emotions. Mind and body go hand in hand, especially in the dojo.  If the mind is clear and calm, the actions of the body follow suit.

By giving students an outlet both physically, through exercise and training, as well as mentally, by building focus, stamina and flexibility into one’s thinking.

Martial arts address’s aggressive behaviours at the root.  Each student learns to manage their emotions and gains confidence by setting and working towards personal goals.